Sinnah is an unique free software Synthesizer with a very distinctive sound character for PC & Mac!

NUSofting released today a update for the free Sinnah Synthesizer plugin with new features and bugfixes. Check out below the new features of Sinnah. 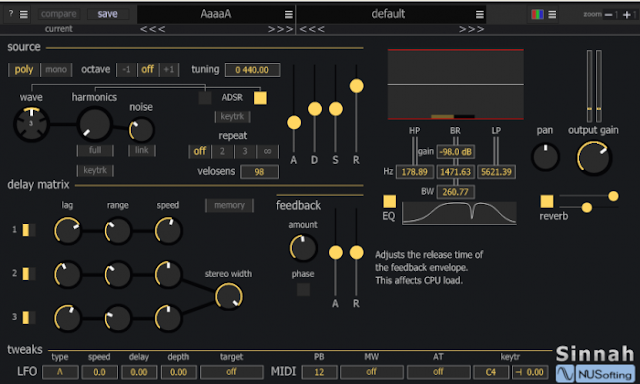 Sinnah is a synth based on a single complex oscillator that includes five waveshapes with increasing spectral complexity, harmonics level for all waveshapes, noise level, and a delay matrix.

Cherry Audio PS-20 is a supercharged, polyphonic Korg MS-20 emulation with MPE support, expanded patch matrix, and more for just $29 USD. The number of synthesizer emulations has increased a lot in the last few […]

Arturia extends the sound spectrum of its MicroFreak in firmware 3.0 yet again with three new razor-sharp, harmonic-rich oscillators from Noise Engineering Arturia’s MicroFreak is probably one of the most successful experimental synthesizers ever developed. […]

For a limited time, you can download the Arturia Analog Lab Intro plugin for macOS & Windows with 500 high-quality synth sounds as a free download.  We love all free plugins or if there is […]