That was a surprise yesterday that Electro-Harmonix released a Synthesizer App for iPhone and iPad. It was not announced before, so it was an astonishment release for all bloggers outside. This new app emulates an old hardware Synthesizer which is based only on one oscillator and very compact size. Also this machine released back in 1980, has a very unique sound and possibility to play with it because this synth doesn’t feature a classic keyboard but an early version of a touch-keyboard. Here is a picture from the 1980 released Hardware version. 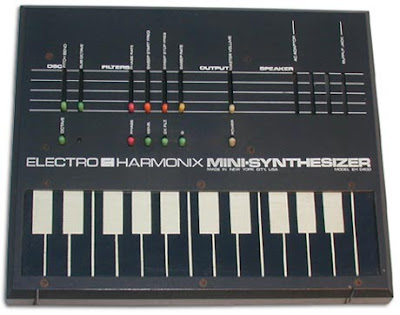 Electro-Harmonix now released this old Synthesizer as digital emulation and bring it to iPhone and iPad. An Android version is also planed. You must be careful when you purchase the synth now. This synth isn’t universal so if you buy it as iPad version, you can use only the iPad version and not the iPhone version. The phone version is cheaper than the iPad version but has the same version. If you love is big for this app, you can even buy both version and use them both on iPad.


This is the iPad version 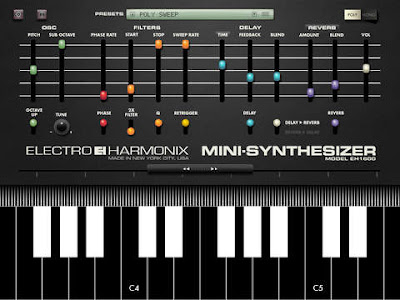 This is the cheaper in price iPhone version of the Mini-Synthesizer. He comes
with the same features than the iPad version. 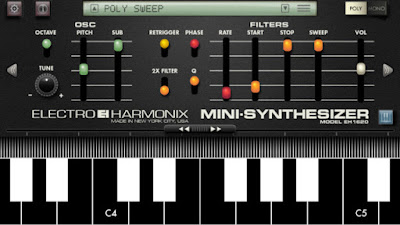 Electro-Harmonix, a pioneer since 1968 in the field of sound effects pedals for musicians, has produced an app which is a faithful digital re-creation of their circa 1980 analog cult-classic, The MINI-SYNTHESIZER.The MINI-SYNTHESIZER app comes with 22 presets and the ability to store an almost unlimited number of user presets programs. Intuitive, flexible and powerful control are provided by the MINI-SYNTHESIZER’s 12 sliders and nine switches. Here’s a breakdown of the user interface:OSC Section

The easy-to-use Electro-Harmonix MINI-SYNTHESIZER App is loaded with great sounds and features and is sure to appeal to serious musicians and non-musicians alike.