A lot of delay stuff in the past days. Now, Inear Display has released version 1.2 of Incipit the creative delay toolbox for Windows and Mac. This update brings some new features and bug fixed. 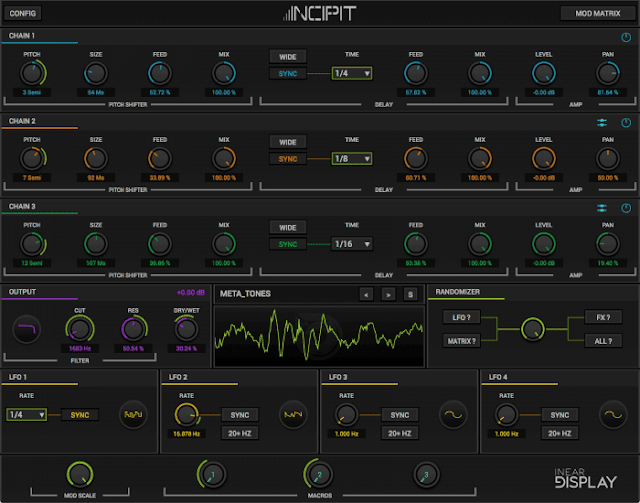 Version 1.2 extends the sonic possibilities of Incipit by adding the option to route the effect chains in several serial and parallel configurations. Chains 2 and 3 can be configured to either act as they did in the previous versions (layered on top of the preceding chains) or to use the output of the preceding chain as their input. This is especially useful to create more complex resonance effects.
The delay effects now have the option to operate in Ping-Pong mode, and the global amplitude of the processed signal can now be independently adjusted.
To showcase these features, Incipit 1.2 brings 10 new presets that can be found in the v1_2 category.
Changes in Incipit v1.2
·       New: Ping-Pong mode for the delays.
·       New: the effect chains can now be put in serial configuration.
·       New: processed signal output amplitude control.
·       New: 10 new presets to showcase the new features.
·       Modified: now avoiding level jumps when switching between presets.
·       Fixed: bugs when using the VST version in Ableton Live on OS X.
·       Fixed: UI glitches when opening 2 instances of the plugin and closing the second one.
·       Fixed: MIDI program change bug.
·       Fixed: preset files saved without extension on Windows.
More Informations here: https://ineardisplay.com/plugins/incipit/

Here is a demo from my channel: