Roland released today at Summer NAMM 2015, the SH-101 Software Synthesizer as Plug-In Version. SH-101 was released first as plug-out Synthesizer now available as Plug-In for everyone 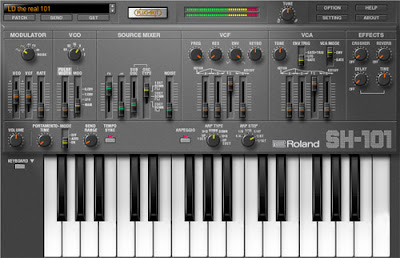 The SH-101 PLUG-OUT Software Synthesizer is a complete reproduction of the iconic SH-101—right down to the fine details and odd quirks that make it one of the most popular classic synthesizers of all time.
Based on Analog Circuit Behavior (ACB) technology, it not only reproduces the SH-101’s legendary sounds, but faithfully recreates the very behavior of its analog circuitry—all with a level of authenticity that could only come from the company that created the original.
The now legendary SH-101 was a monophonic synthesizer launched by Roland in 1982. In contrast to the many complex synthesizers available at the time, the SH-101 quickly became popular for its characteristic tone and simple one-VCO › one-VCF › one-VCA › one-LFO structure.
A legion of artists found it quick to program and adept at bright edgy tones and exciting sound effects.Thirty years later, the SH-101’s hallmark sounds continue to be sought after by electronic artists the world over.
Features: