During the Superbooth 2017, the ROLI gave me an overview of the new Blocks 5D controllers and I was quite impressed about the full integration in other third-party software. Now the logic consequence: ROLi worked together with Unfiltered Audio bring a new delay plugin on the market that allows real time parameter changes with the Bocks 5D system. Instant Delay features a modular approach how to work with modulation and includes the artifact-free delay buffer from Sandman Pro. 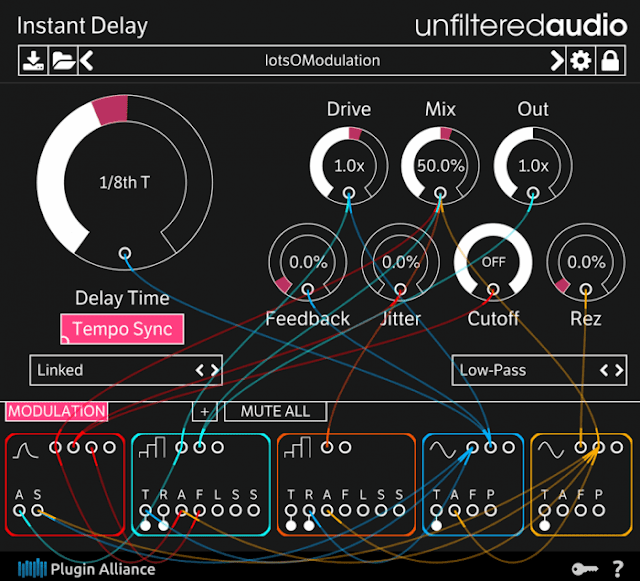 Anyone who is familiar with Unfiltered Audio can probably guess that even a simple delay from these guys is going to be a little different. Drop Instant Delay into your standard delay returns, and it will dutifully perform all the everyday tasks you’d expect – anything from stereo echoes on a sultry vocal track to ambient delay tails on an undulating synth pad. But it’s Unfiltered’s unique creative touches that make this a must-have plugin, even if you already have a dozen different delay options at your fingertips.
For its deceptively simple interface, Instant Delay offers a huge amount of control and sonic possibility. The innovative layout of the Delay Time setting not only offers tempo syncing for stereo channels together or separately, but also the option to offset one channel’s delay time relative to the other, thus widening the stereo field for shorter offset times, or creating mesmerizing syncopated rhythms for longer ones. Create a simple flange effect on a mono lead track with a short, linked delay; then try upmixing it to stereo with a small offset. Then increase the offset and crank up the feedback to whip delay tails around your head, and finally dial in some natural character with the Jitter knob, which introduces an element of randomness to your selected delay time.
Features of Instant Delay
Instant Delay is now available for Windows and Mac (VST/AU/AAX) for $49 USD and users of BLOCKs receive this plugin for free.
Beside this new, Unfiltered Audio also announced an update for Sandman Pro delay plugin. Version 1.1 adds native ROLI Blocks integration with four modes of real-time performance control. Also they adds a step sequencer, LFO phase controls, and other features. 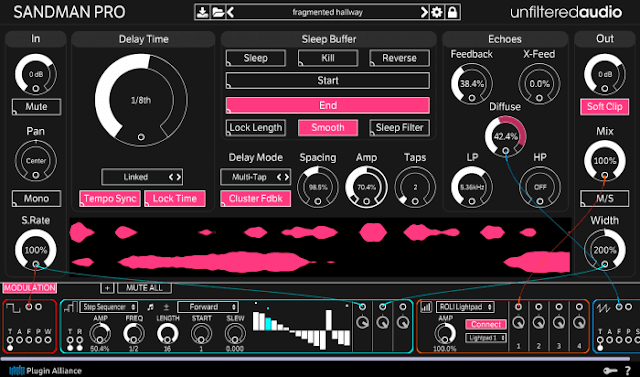 With the addition of a new mode for seamless integration with ROLI’s revolutionary Lightpad Block 5D Touch control surface, Sandman Pro users can now take advantage of the trailblazing hardware’s uniquely smooth, glowing, pressure-responsive design for an unprecedented level of realtime control over multiple parameters with the greatest of ease. Elsewhere, they can create sequences to modulate parameters or even other LFOs — themselves now resettable via a trigger input — with the new Step Sequencer modulator, making use of an expanded choice of interface scaling options while doing so.
Ultimately, Unfiltered Audio’s flagship modulation system now boasts eight freely-assignable and fully-automatable modulators with intuitive drag-and-drop patching to each and every one of Sandman Pro’s creativity-inducing controls. An ability to minimize modulators by clicking on their icons is another addition which will be welcomed, workflow-wise, by seasoned owners already hooked on this truly transmogrifying time machine.
Good news also for all other plugins from Unfiltered Audio. The other plugins will be updated over the next month with these new feature. On top, all Sandman Pro and ROLI Blocks owners will receive Instant Delay for free.