The last weeks, it was an explosion of upcoming new Behringer Synthesizers. Every week, Uli Behringer announced new products and projects for the future. The lastest news are that they registered the trademark of the Oberheim OB-Xa. The OB-Xa was available in the past in a four, six and eight voice polyphonic versions. One of the main features of this synth was the patch memory function which allows to save up to 120 patches. (early versions a minimum of 32 patches).

One of the reasons why Behringer plans to recreate the Oberheim OB-Xa are the Curtis chips. They announced yesterday also that they will produce in cooperation with Cool Audio new SSM and Curtis Chips (Oscillator 3340 and Filter 3320). You can find these chips in the Sequential Circuits Prophet 5 or also in several Oberheim Synthesizers like the Matrix 12. Further, they plan also to sell these chips to other music companies.
Uli Behringer posted already in the Gearslutz forum that they received the first batch of Curtis 3340 oscillator chips. 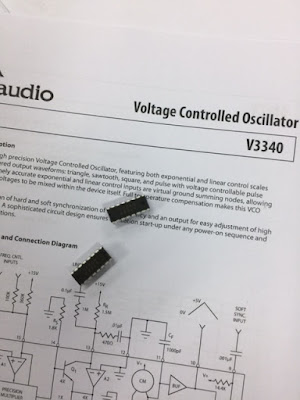 We just received the first batch of our 3340 VCO chip.
It is a 100% exact replica of the Curtis CEM3340 which even includes the 40 year old, 8 micron manufacturing process. It was a difficult and expensive undertaking but we are very pleased with the result as this VCO is considered one of the best sounding oscillators.We are continuing to invest in reviving other legacy Curtis and SSM semiconductors which will allow us to bring back classic synths – all in the most authentic way. We have also reissued the 3320 filter chip which should be arriving in a few months.Uli
I know there are a lot of haters outside who doesn’t like the way how Behringer works but for me personal, the decision to recreate the famous Curtis chips is great because it opens a new world for analog Synthesizers. Not only from Behringer but also from other companies and I have big hopes that we will new concepts of analog Synthesizers based on curtis chips in future again.
I’m pretty sure that the recreation of this famous ships can provoke a new wave of excellent new instruments from different companies not only from Behringer. Really looking forward how the market will react on this decisions.
More Informations here: Gearslutz Forum