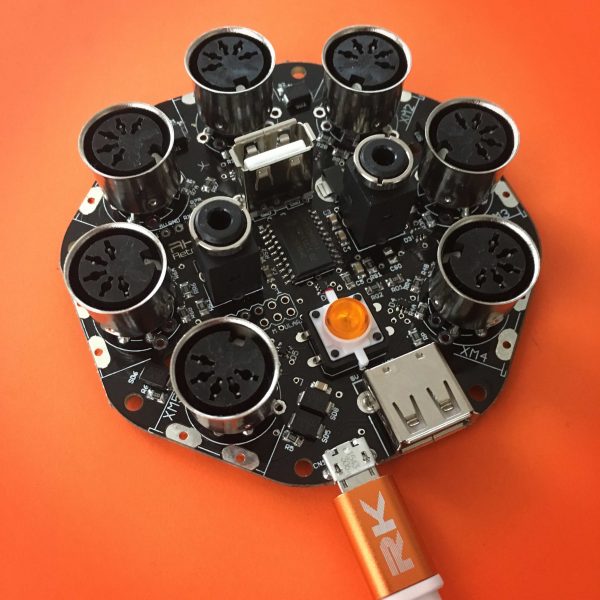 The RK-004 is not your ordinary merger or splitter. The 7 midi DIN5 sockets hide a bit more than you would expect at first sight. Here are the RK-004s fundamental features:

MIDI thruMIDI message arriving at an input will be casted-thru to all connected outputs. This makes the RK-004 behave like a MIDI-thru box. The cool thing is that each connector can act as MIDI input ór MIDI-output. This means you can use the RK-004 to merge up to 6 MIDI-sources into one output, or split one MIDI source  up to 6 outputs. The direction of the ports is ad hoc, and the direction is detected automatically: this means that you just can “plug and play™”, and use the connectors as you like

MIDI merge
Today you want to control your sound module with 2 controllers(=’merge’): just connect and it will merge. Tomorrow you want to control 2 sound modules with 1 controller (=’split’): just connect and it will split… any other combination is valid also! The good thing is that you don’t have to reconfigure: the direction will be auto-detected. Note that the MIDI-in mode of the RK-004 is not opto-isolated like regular MIDI-in ports.
Analog SYNC input
In order to use your favorite analog sync source there is the sync-in connector which accepts good-old analog sync input. With this connection it is possible to use an analog sync generator as master clock to which the whole remaining system will lock. So yes: this will generate MIDI clocks from analog sync input !
Analog SYNC output
The other way around: if you want to slave-sync your analog equipment with a clock originating in the digital MIDI world there is the sync-out connector. On this connector you can connect analog equipment which will lock to the generated sync signal.
Ports can be defined as sync-only
You can change the MIDI connector into sending out sync signals. With the use of a MIDI to Mini-jack converter (as provided with e.g. the Arturia Beatstep) in reverse to the RK-002, this enables you to use the MIDI-connectors as sync output. This way you can also use the RK-004 to drive a bunch of (example given) Pocket Operators.
Tempo manipulation
Every port can be set to run relative to the midi or sync master clock (or discard the master clock alltogether). This way you can creatively use sequencer machines to run in different tempo’s with each other.
Stand-alone tempo I
f you don’t use any MIDI or analog sync-master gear on the RK-004 you can use it so generate it’s own tempo just by tapping it.
Raspberry Pi USB Host/ClientConnect a RaspberryPi to the (PiZero)-layout-compatible connector, download our disk image and use the RK-004 to merge your USB-only midi devices into ‘the real MIDI world’.Not only for RPi projects; By setting the 1st RK-004 port to Serial mode you are able to connect the RK-004 via serial port on a regular baud rate, easily integrating other hardware projects into your music.
Configurable with Audio onlyIt is not necessary to have another MIDI interface at hand to set the clock divisons, force port directions or set sync properties. Just a phone or tablet with audio out can be used to configure the RK-004 on this page.
More Informations here: Retrokits RK-004