Just before the NAMM Show, the CES is happening in Las Vegas. This year, Roland announced the GO:Mixer – a compact audio mixer for smartphones. Interesting device for mobile musicians (IOS and Android) and curious to test this device maybe in the future. Something I miss btw is the not available Midi Interface on it. This would absolute great to see on this device. 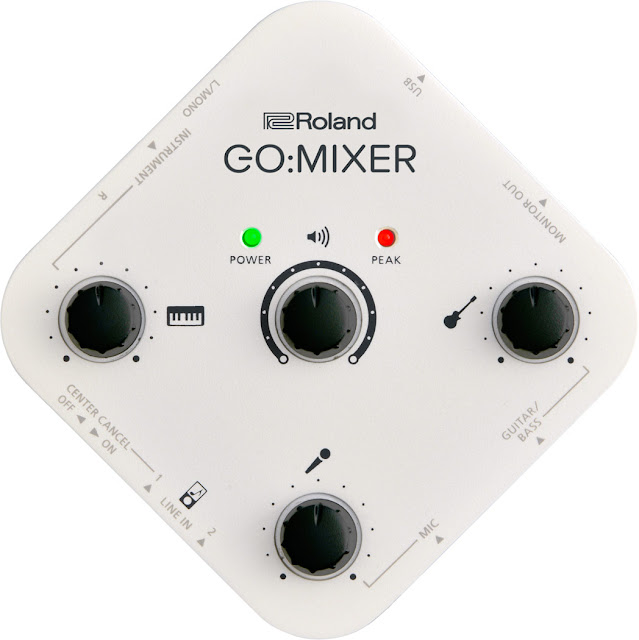 Roland  has introduced GO:MIXER, a compact audio mixer for smartphone video production. Compatible with iOS and Android smartphones, GO:MIXER connects digitally via an included cable, providing clear stereo sound that’s a marked upgrade over using the phone’s built-in mono mic or analog line input. With multiple inputs available, users can connect a mic, musical instruments, and media players, and mix them all together live while they shoot. Ultra-portable and simple to use, GO:MIXER is the ideal solution for adding a pro sound touch to social media videos.
With the great video quality of today’s smartphones, capturing music performances and other types of content has never been easier. However, recording a high-quality audio soundtrack along with a video has typically required complicated external gear and time-consuming editing in post-production. GO:MIXER greatly simplifies the production process, enabling users to capture audio directly to a smartphone video in real time. 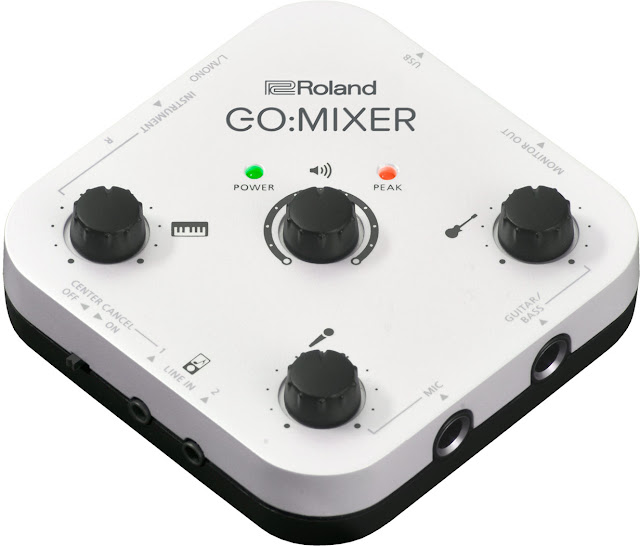 Offering plug-and-play convenience, GO:MIXER is ready to use out of the box. It’s powered by the smartphone connection, so no batteries are required. And with a compact size that measures just 3.75 inches (95 mm) square and 1.1 inches (28 mm) tall, GO:MIXER is perfect for desktop and mobile use.
GO:MIXER supports connecting up to five sources at once via inputs for a vocal mic, guitar/bass, stereo keyboard, and two stereo line-level devices (such as music players, drum machines, etc.). Front-panel knobs provide hands-on mixing for the mic and instruments. There’s also a stereo output jack for monitoring the sound via headphones or an external amplification system, plus a dedicated panel knob for adjusting the monitor level.
One of GO:MIXER’s line-level inputs offers a selectable Center Cancel function, which reduces the volume of the main vocal in a music track that’s playing through the input. This is a great feature for singers, allowing them to create karaoke-style tracks on the fly.
More Informations here: Roland GO:Mixer