Also just before new year, developers release new plugin. NUSofting released this week the Peti SA Harmonium / Accordion Synthesizer plugin which can emulate the specific sound of an harmonium and accordion based on FM Synthesis. The idea is sound innovative but doesn’t know it sounds. Looking forward to checking out this new synth. 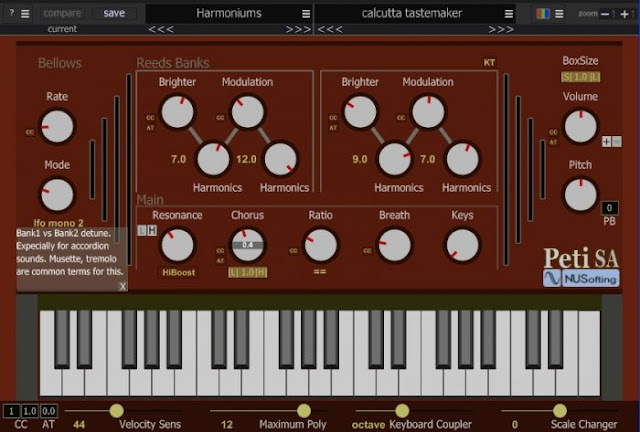 Peti is a unique plugin instrument, which uses hybrid FM/PM* synthesis technology to emulate the sounds of the Harmonium and Accordion, members of the Reed Organ family. Traditional Reed Organs operate by means of hand-or foot-driven bellows, which pump air over metal reeds to make them vibrate.
The Reed Organ dates back to 1840, when the Harmonium was patented in Paris by its inventor Alexandre Debain. But the so called “free-reed” instruments are much more ancient, like the Chinese mouth organs. The famous Melodica is also a “free-reed” instrument. The Harmonium in its smaller form is widely used in north Indian music and, as derivation, in pop and rock music too for its full and sweet sound.
Peti is capable of emulating a wide variety of reed organ variations, from both suction and pressure families, accordions, as well as timbres which resemble pipe organs. Within the new Peti SA the synthesis engine has been improved allowing more variations and better emulation of many harmonium and accordion types.
More Informations here: NUSofting Peti SA Synthesizer