The Synthesizer manufactory from England just announced a really cool new product. The Modal CRAFTsynth is a very cheap and cool to use synthesizer. You can build it without soldering and you can recall patches from a dedicated app. The design looks very cool and also the features. 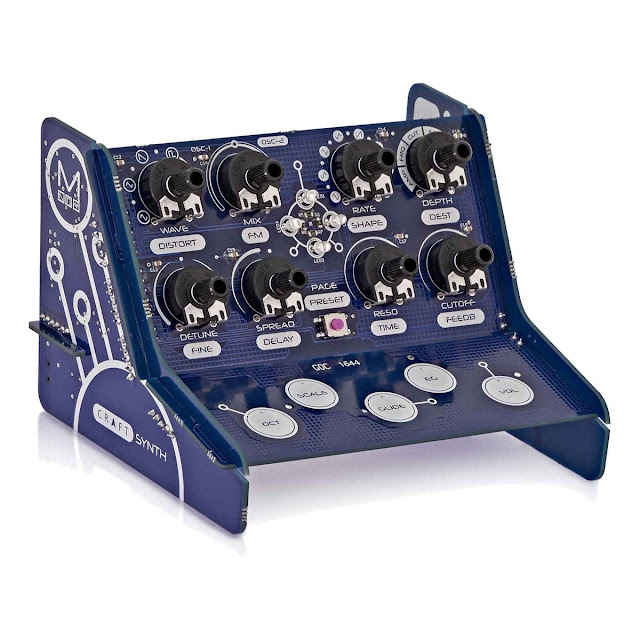 The Modal CRAFTsynth Monophonic Synthesizer Kit allows you to build up the synthesizer from 5 separate boards, with its simple yet effective design making it easy to assemble. The assembly process requires no soldering, tools or specialist knowledge, everything you need comes straight out of the box and allows you to slot the pieces together with ease. You can assemble the synthesizer within 10 minutes, giving you a hands-on experience when it comes to building your synth.

The CRAFTsynth features 2 oscillators per voice with a range of controls for in-depth manipulation such as detune and fine detune for OSC 2 as well as a selection of different waveforms including: Sine, Tri, Saw PWM, Noise and FM (OSC2 modulates pitch of OSC1). This versatile range of controls allows you to sculpt your own synth sounds with ease. The LFO features six destinations in total including: VCA amplitude, filter cutoff, FM amount, OSC mix, PWM amount and pitch/frequency. This wide range of parameters allows you to create your own sounds with extreme precision, giving you in-depth control over every part of the sound. There is also a mixer stage of OSC levels, allowing you to further edit your sound for added depth and clarity. The Unison/Spread mode splits the oscillators into four separate sub oscillators per oscillator, virtually expanding your synth to a total of eight oscillators which are also de-tunable for a massive sound. The Modal CRAFTsynth is also fully class compliant, meaning it can be controlled by a wide range of popular DAWs, offering seamless integration for your favourite programs and applications.

The Modal CRAFTsynth features four LFO wave forms in total, with each LFO being invertible for added versatility. The LFO wave forms are as follows; Sine, Tri, Saw, Square. This standard range of LFOs allows you to create everything from atmospheric pads to in-your-face leads and more. The resonant low pass filter can become state variable when using the CRAFTapp (available end of 2016). The CRAFTapp that comes included with the synthesizer allows you to get in-depth with your synthesis, giving you the ability to control custom enveloped, low pass filters and more.

The highly intuitive layout of the Modal CRAFTsynth places everything you need right at your fingertips. The eight front panel potentiometers offer unparalleled editing control with two pages of editing functionality, allowing you to control parameters with precision. The CRAFTsynth also features 16 path storage locations (expandable through CRAFTapp) as well as 16 recallable EG presets for ease of use (full editing control with CRAFTapp). The playable touch panel interface features five note keys plus controls for scale and glide time. The touch panel interface’s keys are clearly labelled with its primary function giving you the ability to change between scales and more. Delay and distortion effects are also included for adding harmonics and texture to your sound. A Headphone and Line output are included for direct monitoring as well as outputting the CRAFTsynth to speakers and other audio devices. The synthesizer itself is powered via a USB cable or an optional AA battery pack.
Modal CRAFTsynth specification:
Due to ship mid-December 2016, MSRP UK £79.99 including VAT, projected US and Euro pricing TBA. Pre-Order here: Gear4music.com