Now it’s official and I write about it. After the first release of the System 1 with 4 voice, Roland introduced the System 8 Synthesizer with 8 voice polyphony. What I have heard in the first demos, the sound quality is great and has also some cool features. What is interesting to notice: if you don’t love the green lights, there is now a possibility to switch off the lights or make it darker. System 8 will have the latest generation of the acclaimed Analog Circuit Baviour (ACB) technology on board.
What is amazing to see that the System 8 ships with with two new Plug-Out Synthesizers. The Jupiter 8 will be the first Plug-Out and a complimentary Juno-106 Plug-Out will be added in a System 8 Update in 2017. I hope to see the Jupiter 8 and the Juno-106 also as future Plug-In Version. 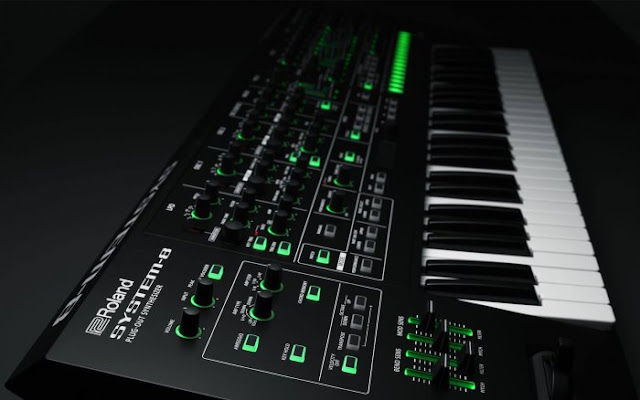 Powerful and deep, the SYSTEM-8 delivers a wide range of sounds inspired by over four decades of legendary Roland synths. To complement its internal sound engine, the SYSTEM-8 can host and control up to three Roland PLUG-OUT software synthesizers, and new JUPITER-8 and JUNO-106 PLUG-OUTs are included with purchase. The synth also includes a massive array of hands-on controls, as well as a polyphonic step sequencer, vocoder, CV/GATE outputs, arpeggiator, and other creative tools.
First developed by Roland for the popular AIRA series, ACB technology has received universal acclaim for its ability to authentically recreate the sound and behavior of historic analog synths. The SYSTEM-8 features the most advanced ACB engine yet, which powers eight voices of polyphony, three oscillators, hi-resolution filters, and versatile LFOs. Expressive and diverse, the engine is capable of producing everything from classic analog-style pads, basses, and lead synths to crisp, dynamic tones and evocative textures that are ideal for modern sound designers.
The SYSTEM-8 also features three expansion slots for hosting and controlling Roland’s PLUG-OUT software synths. JUPITER-8 and JUNO-106 PLUG-OUTs are included, giving users immediate access to sonic reproductions of these Roland classics. Optional PLUG-OUTs such as the SH-2, SH-101, PROMARS, and others are supported as well. Using the SYSTEM-8’s Performance mode, it’s possible to combine the internal synth engine and hosted PLUG-OUTs to create super-synth patches with layered voices, custom splits, and more.

The SYSTEM-8’s intuitive panel is filled with knobs, buttons, and sliders for hands-on sound creation and performance expression. Many filter types are available courtesy of the advanced ACB engine, including a powerful side-band filter inherited from Roland’s influential V-Synth. Top-quality effects are on hand for adding character and ambience, from overdrive, distortion, and fuzz to delay, chorus, reverb, and more. And like the numerous synth parameters, the effects have grab-and-go controls that make it easy for users to enhance sounds as they play.
Also included in the SYSTEM-8 are many creative tools that encourage musical exploration. The polyphonic 64-step sequencer features a familiar TR-REC style interface and dedicated controls to record, play, and manipulate loop sequences. The Arpeggio function is equipped with quick-access knobs for switching patterns and styles in real time, while Chord Memory allows the user to trigger polyphonic note stacks with a single key. The SYSTEM-8 even has an advanced vocoder built in, offering another option for delivering unique and memorable synth performances.
While the SYSTEM-8 excels as a performance instrument, it easily integrates into a music production environment. The synth functions as a USB audio/MIDI interface for a DAW, and the 49 full-size keys (with velocity) provide a responsive keyboard for recording MIDI tracks. There’s also a control surface mode for using the SYSTEM-8’s knobs, sliders, and buttons with soft synths. The SYSTEM-8 is equipped with CV/GATE outputs, enabling a user to send note/pitch data from the synth engine and step sequencer to trigger modular synths and vintage analog gear.
SYSTEM-8 features
More Informations here: Roland SYSTEM-8