I think today, it’s a nice day for software Synthesizers. After the launch of the new Blamsoft Synthesizer for Reason  and the GUI Teaser for REPRO 1 Synth by U-he, a third developer released today a new product. Audreio released today a interesting new plugin, a drawbar Synthesizer. Originally it was released under the Rack Extension format and now the developer go further and released it as standard plugin. 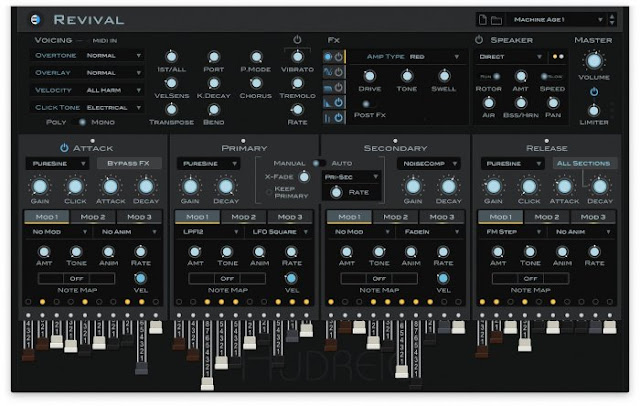 Originally built only as a Reason Rack extension, the acclaimed Revival instrument has undergone a full UI update and has been ported to other plugin formats. Now available as AudioUnit, ProTools’ AAX, VST3, and VST2, on both the Mac and Windows platforms.
Revival is defined by outstanding playability and an almost limitless range of sound-design possibilities. “This is a synth for almost any genre of music” says George Persiantsev, CTO of Audreio. Explaining further, he adds, “Revival is equally at home emulating classic instruments such as a Hammond B3 as well as going far beyond the analog sounds into rich and complex electronic textures, leads, basses, and much more. This incredible sonic palette is founded in the unique combination of drawbar additive-synthesis, harmonic modifiers, vintage effects, and a rotary speaker emulator.”
Revival features
More Informations here: Revival Synthesizer