Today comes a surprise from Native Instrument. The Berlin based company released an advance version of their delay plugin Replika. Replika is pretty easy and wonderful sounding delay plugin for PC and Mac. In the past this plugin got some good vibes from Jean-Michel Jarre. He use Replika for this recent albums of Electronica. Personally I love Replika a lot because it is very easy to use and not complicate to understand how the plugin works. But today this amazing concept got a major update and brings a lot of new features and expand the possibilities of Replika XT to another level of delay plugins. We can talk here from an advance version Replika with additional features and technologies inside.
What we can see here is that the graphical user interface comes with a lot of more details and depth parameters than the standard Replika version. Here a comparison of both plugins on the GUI side. Native Instruments does a good job for owners of Replika. They can upgrade for a fair 50% off price to Replika XT version. In my tech eyes, this sounds interesting: The five deeply modeled delay modes span crisp digital repeats, analog warmth, and experimental textures. Additionally, seven effects and advanced options allow producer’s to add depth and width to their mixes with refined control. Something like you can find also at UVI Relayer where you can use the Delay very creative and also in a very experimental way. This new version of Replika goes in the same way as Relayer and offer also some interesting ways to transform sounds.
Personally, I love see that creative purpose effects comes more and more to life in the plugin market. We have enough standard effect plugins currently in the market and this brings a bit more life to the fx. Maybe I receive one day the chance to test this out. Compare Replika and the new release Replika XT. Replika was giving to users during Christmas 2014 for free.
Replika 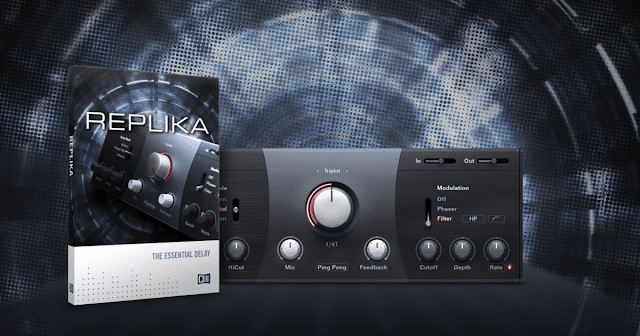 Replika packs two professional quality delays and a powerful diffusion algorithm into a sleek, streamlined interface. Simple to use with a resonant filter and classic phaser built in, REPLIKA is a versatile delay for anything from subtle slapback to warped sheets of noise.
It provides three distinct algorithms. Modern is a digital delay that delivers the crystal-clear repeats of high-end units. Vintage Digital delivers the charismatic grit of early studio delays. Diffusion delivers a fresh sound that rides the line between delay and reverb.
A high-class resonant filter and classic phaser add subtle to drastic motion that can be sync’d to the beat for intense sound design. You can even adjust your signal’s placement in the mix with normal, wide, and ping pong stereo modes.
Replika’s powerful sound shaping features are laid out on a slick, essentials-only interface. Choose your delay mode and fine-tune lows and highs. One-knob subdivision adjustment steps you through the most widely-used delay times. And adding modulation is just as easy with simple combinations of three intuitive knobs and two buttons to choose between phaser and filter – lowpass, highpass or notch.

Native Instruments Informations:
The five deeply modeled delay modes span crisp digital repeats, analog warmth, and experimental textures. Additionally, seven effects and advanced options allow producer’s to add depth and width to their mixes with refined control. The plug-in is aimed at producer’s who need an easy-to-use, all-in-one studio delay for echoes, special effects, and production tricks.
REPLIKA XT was inspired by some of the most revered delays in history. The plug-in features five delay modes, each with its own distinct character. Modern provides clean, precise, controllable repeats. Vintage Digital offers warm, repeats modeled after early samplers and digital delays. Analog replicates the sound of analog bucket-brigade pedals. Tape provides the punchy, smooth sound of classic tape echo units. Finally, Diffusion Mode provides swirling reverberant echoes unlike any physical space.
Easy to repeat
REPLIKA XT makes it easy to create sophisticated rhythms, widen your mix, or explore a universe of sound design possibilities. Use the pattern controls to quickly create rhythmic repeats that shift organically with the music. Dial in the perfect stereo image with panning for each delay and dry signal, or adjust ducking time to keep percussive hits tight – uncompromising control at a glance.
REPLIKA XT features a clear interface that makes even complex effects fast and easy to create. Pattern controls allow producers to create rhythmic repeats that shift organically with the music. Panning for each delay line as well as the dry signal allows a custom stereo image. The ducking feature keeps percussive hits tight while still adding space to a drum mix. Together, the controls on REPLIKA XT’s intuitive panel provide uncompromising control with a minimum of effect.
Seven steps to effection
Combine the delay modes with pristine effects to produce classic mixing tricks, and add shimmer, dimension, and motion to your music. REPLIKA XT includes seven time-based and pitch effects to add to your repeats. Or turn the delay down and use them on their own.
More informations here:
http://www.native-instruments.com/en/products/komplete/effects/replika-xt/?content=3361